Joe At A Glance

I'm often described as curious--it goes hand-in-hand with my love of sharing knowledge. It was Gene Roddenberry and Johns Hopkins CTY that motivated me to pursue video production as a career: the ultimate platform for educating and inspiring others.

My career goal is to narrow my focus into scriptwriting and video editing. I see myself primarily as a story cutter, and I'm extremely excited when I discuss misguided anti-vaccine paranoia, or revolutionary new technologies like drones or GMOs. I want to move my career into that space, where I can help educate others on the benefits of science and technology--and spend every day learning from scientists, engineers, and doctors.

I also want to return to the Baltimore area. Maryland is the most exciting crossroads for the industries that interest me: healthcare, science, technology, education, and gaming.

The most important part of any video production is to determine what the message is, who the intended audience is, what the audience expects, and what action they should take. This is an essential skill that I have been practicing since 2007.

Writing for video has a variety of special considerations; a good scriptwriter can account for "breathing room" through dialogue, as well as everything the viewer sees and hears. An experienced scriptwriter can adapt to any production circumstances, including a limited budget. I excel at balancing the needs of technical complexity and audience accessibility.

Whether new hires need to be brought to speed or complementary staff need cross-training, it's important to have someone on crew who can handle the task without compromising work quality or productivity. My experience ranges from educating inexperienced students in the classroom to showing seasoned professionals how to use new gear during a live broadcast.

A good director will ensure that your talent looks flattering to themselves, to your message, and to you. This involves feedback on vocal inflection, pace, and mannerisms. More importantly, I'm highly capable of rewriting a script on the spot to match the talent's speech patterns - which can minimize shooting and editing time.

Running camera involves composing the frame, ensuring the appropriate subjects are in--or out--of focus, and the color balance is set such that it'll make editing easier. As an editor, I know what footage will be needed in the edit suite later.

Good clean audio is more important than great video. Has the air conditioning been shut off? Is the actor making a floorboard squeak? For usable audio, a recordist must be fully aware of the surrounding shoot environment. I take great pride in my audio capabilities during and after a shoot.

In the field, you need to be highly mobile and adaptable to any number of surprise obstacles. In the studio, you need a team that's going to prioritize the right gear at the right time over speed. I have extensive experience in both environments that makes me a well-rounded choice for any team.

Webcasts, webinars, live classroom broadcasts: whatever name you prefer, it requires a team player who can balance broadcast needs with the quick pace of a live production environment. That often means quickly and discretely resolving issues that crop up, without interfering with the audience's enjoyment or participation. I've been using Tricaster 40 for over two years, and have past experience on Wirecast.

A good editor is invisible: they make the audience think about the message, not the cutting. I'm versatile with an Adobe Premiere Pro & After Effects or Apple Final Cut Pro workflow. My experience as a scriptwriter makes me an exceptional storycutter; I love determining where the story is in any footage--and it's exciting to demonstrate this skill, live, to eager students.

Color correction can set the tone of your project (known as Color Grading in that instance), it's also used to make the colors more accurate or to make them more vibrant. This is an area where I have a decent baseline knowledge and would especially welcome any opportunities to learn more!

Blue screen and green screen are popular in many markets. While the most critical work occurs on set with lighting and shooting, sometimes an editor receives chroma key footage that is difficult to work with. I have saved some "less than ideal" footage and made it presentable. While editors generally abhor the phrase, "fix it in post," an editor who is capable of doing so is an asset--that's me.

Responsibilities include lead camera operation and lighting for documentary and music video production.

Instructs adult students in Adobe Photoshop, Adobe Premiere, and Adobe After Effects. Collaborates with a small team of instructors to provide a consistent learning experience among the courses in the Graphic Design curriculum. Started with Anthem Institute and was retained after purchase by Premiere Education.

Focused in video production and created the course, Filmmaking Practicum. Provided video editing services for the Office of Multicultural Services. Awarded the Robert W. Sapora Filmmaking Apprenticeship, Presidential Award and Award of Appreciation of the Office of Multicultural Services, and recognized in Who's Who Among Students in American Universities and Colleges, 2006. 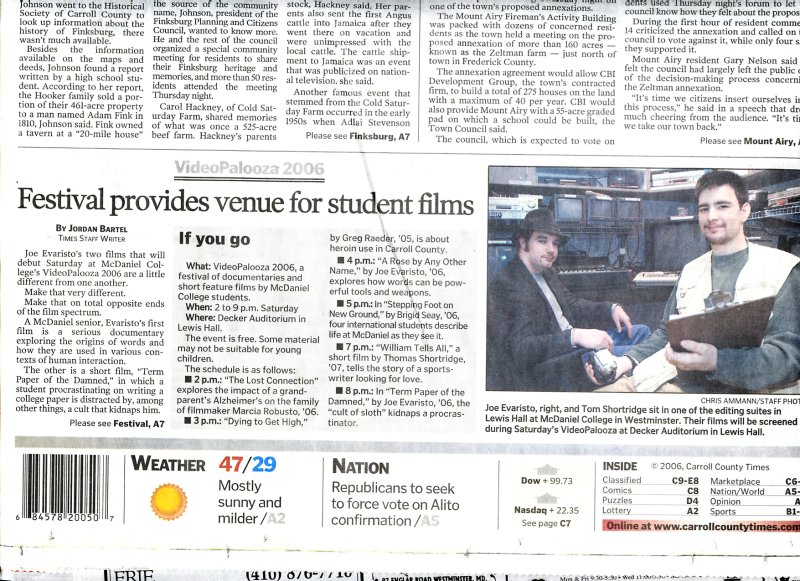 Full text of all recommendations is available on LinkedIn.

"Joe has always done outstanding work and has been a pleasure to partner with as his creativity and professionalism have always been evident. Joe is a terrific script writer as well as an excellent video technician. He has very good people skills and clients praise his work often. I would highly recommend Joe for his work and integrity."

"He is always on time and was self motivating. He knew what needed to be done and I didn't have to tell him step by step what to do - and the work always got done right. He is fun to work with, he is respectful and polite and very knowledgeable."

"Joe is extremely knowledgeable, highly intelligent and very adaptable to situations that come up during the execution of his job. It's a pleasure working with him."

"Joe was very professional and skilled in his craft. He was extremely involved and contributed to many of Greenrose Media's great line of work!"

"Joe is a special person, he is the perfect blend between creativity and efficiency. Together we completed several videos for TV and Web Campaigns. Joe has shown to be incredibly progressive, keeping up with shifts in technology and style. I'm happy to have worked with Joe and can provide a strong professional recommendation for him."